The current dimension selection disappears as soon as you start editing content. That sucks, especially if your system offers multiple dimensions. While editing content the users offen misremembers in which dimension he is currently working. 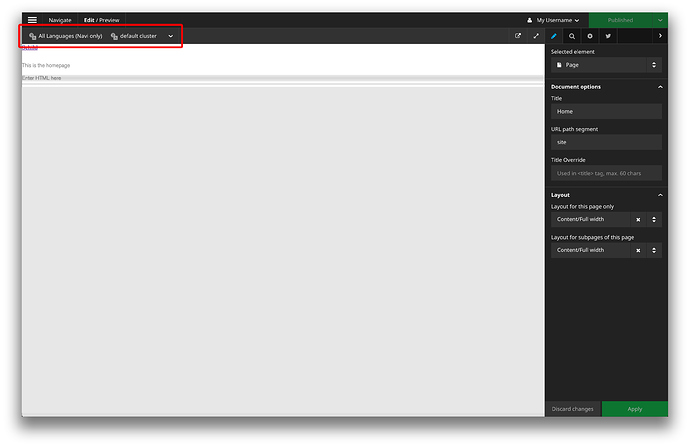 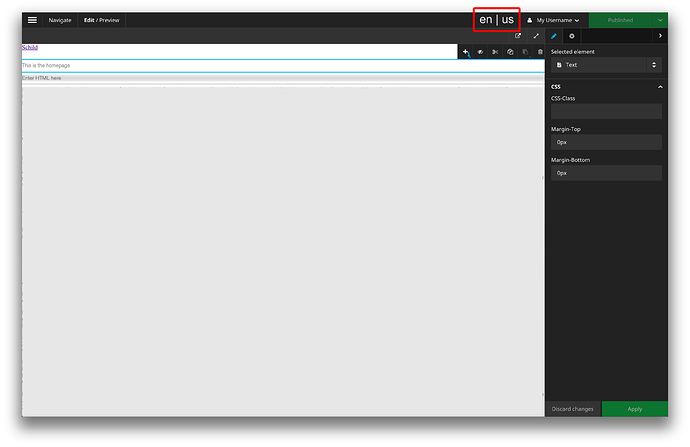 Thanks for raising this topic. I agree that, from my own experience, this can be quite confusing.

I also thought about putting that information next to the username, but I’m a bit reluctant because that (horizontal) space is quite precious.

Question is if we could leave it in that particular bar, but move it to the right:

(ugly screenshot is in iPad dimensions with 1024px width)

Would also be perfect. It is only important to make it permanently visible. Place is more or less regardless. And maybe a short name for the dimensions is necessary (e.g. the uriParameter).

This could make sense, could you explain why the user forgets what dimension it is? Usually the page content should hint it and it is accessible by deselecting the current element. Maybe there’s something else needed than displaying it all the time. In any way we should strive not to use the top bar since there are plans for using that for things like search. But the context bar can already be full when there’s a lot of buttons for the editor, so for small screens putting it there probably won’t work. Not sure what to do here.

This could make sense, could you explain why the user forgets what dimension it is

Maybe it is because he is focused on other tasks, e.g. content not dimensions. Maybe he switches between tasks and forgets about the current dimension. Or maybe he is just not that smart

As you sayed, it is visible by “deselecting the current element.” which requires an additional action. But it is not visible while editing a content element! And I think it should be visible all the time to clearly define in which dimension / language / market / whatever your currently editing content.

It will save the edtior a few seconds and a few clicks and he will feel a bit more safe, cause he is sure that he is doing the right thing in the right dimension.