Hi everybody. Here comes a little update concerning the branding.

CORE4 (https://core4.de) has joined the effort and reworked the branding guide. They also made a proposal for a small visual change of the logo to make it easier to be used in different contexts. Especially if the horizontal space is limited. e.g. when producing labels for T-Shirts (see below).

When placing the logo we currently use a save area of the width of the N to ensure enough whitespace. For a limited horizontal space this leads to a really, really, really small logo.

The solution would be to decrease the space between the N and “Neos” (or “Flow”). 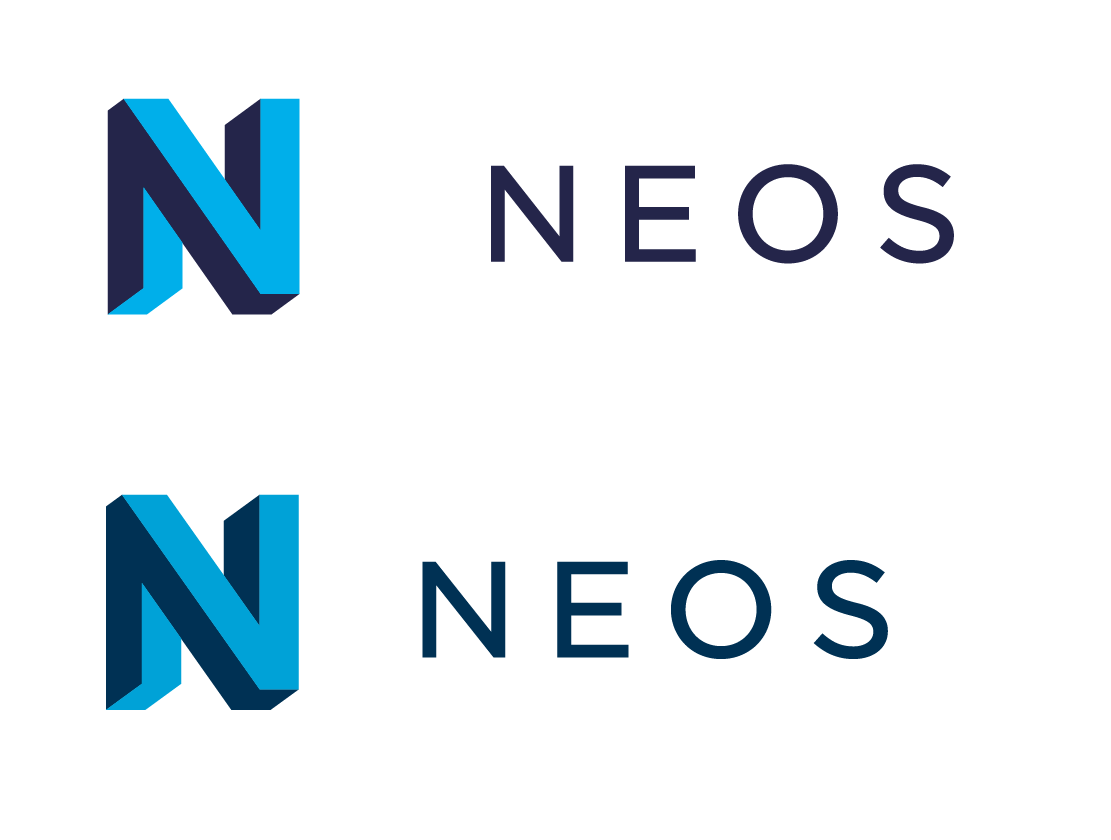 There also has been a change of colors. We now have a proposal for standardized Pantone colors and their corresponding RGB and CMYK values. With the Pantone color we can get the exact colors when printing. 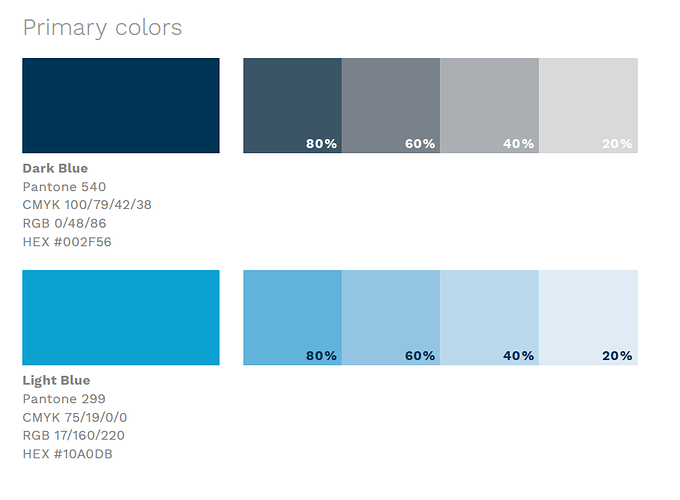 I personally would go with this one last change of the logo, because it makes it easier to be used in different contexts. After this I would not make any changes to it and let it “stabilize”.

What is your opinion on that?

A poll for Neos team members:

Thanks for your input

Thanks Florian going forward with this

I’m not a designer, but the original variant definitely feels better in a normal scale, cramping them together doesn’t feel right.

For limited width usage, I’d just use our N without Neos. If we really needed to cramp the full logo into such narrow space, maybe we can create a condensed variant of the logo, but clearly define in what circumstances it is allowed to be used.

@dimaip looking at both logo’s now I actually feel like the ‘wider’ version has too much space in between, if this would’ve been a choice before we’d released the logo I would’ve picked the narrower version too…

I agree with Rens, the “original” one seems a bit too far spaced.
I’m not a huge fan of the color change, as the old ones seem more vibrant. Are there Pantone colors that match the original better?

Just asked our designer, and she definitely thinks that the first variant is better. I would at least consult the original authors of the logo, before making such dramatic change.

And yes, agree to @beheist about colours, the original ones look more vivid indeed.

Thanks for pushing this forward,

I am rather unsure about the spacing change but I agree to the color change to pantone, so no clue what to vote as it’s one vote…

Also I am still hoping for more colors PLS!

Thanks for taking the initiative to obviously solve some problems your stumble upon.

Still, I wonder why you didn’t involve Okan while you were working on this. I remember that the distance between the logo and the NEOS was quite on purpose, because both start with an “N”. Okan tried different variants and then ended up with the space we currently have. It’s not that this couldn’t be changed, but I thought it was obvious that talking to Okan about the reasoning would make sense.

As for the colors, we basically have two options:

Number 1 has the advantage of getting the color exactly right if you print something with Pantone colors, and the disadvantage that a representation on a computer screen is an approximation of the print color.

Number 2 has the advantage of getting the color exactly right on a screen / when using RGB, and the disadvantage that you need to find a printing color which is roughly in that area.

When choosing the colors, we took a conscious decision to go for RGB. The light blue is very easy to get right (#00ADEE). And as for print: from my experience you often have to take compromises because Pantone often is more expensive or more often, not available. Many printers will offer some substitute colors form the cheaper HKS system or some color which they have on stock. Not optimal, but reality, I think.

This wasn’t to say, we can’t change it. It’s just to let you know that there was some reasoning behind it.

My vote would be rather -1 to apply these changes without at least talking with Okan about it.

Disclaimer: I’m just a developer, not a color expert

@robert: Concerning the color. As I remember correctly, we talked about that a Pantone color would be nice for the logo to get print right. As I see it, this is the best practice for a logo, because you never get colors “right” in print when using CMYK or RGB. The things we already printed with the Neos logo all look different.

As a little example. When I built the wooden Ns for InspiringCon I guessed the color because they couldn’t mix the color from CMYK or RGB. Same goes for printing Shirts when plotting the shape from a foil. You can only order foils of a certain color.

Printing with Pantone (or any other special color) is usually more expensive, so we still need to decide when to actually order stuff but we should at least have the option to do so. So the natural order for me would be:

As for the distance of the N. I am actually torn between the old an the new. For me it is important to reach a decision so we can start working with the logo and not have logos with different distances floating around.

@fheinze for me it’s rather a question of “what is the master color system”?

There is no exact mapping between RGB and print, so we always will have to map from one to another system.

In my opinion we should stick to the RGB #00ADEE as our master blue. Then find the best match in other color systems and suggest everyone to use the same. But not the other way around.

We are a digital open source project, our brand lives a lot on screens. And I love the vibrancy of the blue we have chosen. All the “real world” products are important, too, but in my opinion, secondary. What we should achieve there is a close match and consistency.

If the suggestions by CORE4 are the closest match to #00ADEE, then let’s take them as our recommendation for Pantone (uncoated or coated?). And then create another recommendation for HKS, RAL, Federal Stand 595B, NCS and all the other systems we might need when printing something.

I actually agree with Robert here. Digital is much more important for us than print, and while it’s nice to have the printed logo match the digital one, I wouldn’t want to sacrifice the current color just for the sake of print looking “right”.
Why don’t we just use the original colors, but use the Pantone ones listed above as a sort of “Fallback” for cases where RGB/Hex can’t be used?
As for the spacing discussion - in the end this is about personal taste. I feel the spacing to be a minor detail, so in my opinion that’s not something that needs to be discussed forever. I’d be happy to go forward with the reduced spacing as suggested.

Upps, I already voted “I agree” but that was rather about the spacing which I always felt was a bit odd.

Regarding the colors: it’s difficult, but I do think the Pantone colors differ too much from the original. It just gets another touch and feels less special with the proposed color change.

Btw. we use HKS colors for networkteam and always had problems with different conversions to RGB depending on the actual software.

I also have problems to vote.
I’m totally unsure regarding the spacing. My feeling tells me that the original version fits better and it could make more sense to create a condensed version of the logo.

Regarding the colors I’m fully with Robert and Christopher, the Pantone colors are way too different to switch using those as master colors. I would be in favor of Roberts suggestions: using the oroginal colors and define fitting version in the needed color systems.

Upps, I already voted “I agree” but that was rather about the spacing

uhum, same here… but you can fix your vote

Same here. @fheinze can we maybe have two polls - one for the space and one for the color?

Thanks everybody for all your input

Reading your post and looking at the poll I would go with the following decisions:

1. We are going to change the spacing and reduce it as proposed:

This will make it easier to use the logo in different context. Another example to illustrate this decision is a logo wall with all kinds of different logos of different brands. All logos have to be equal concerning their perceived size. The current logo would be really hard to place and not lose the connection between the N and “Neos” while still keeping the spacing to the other logos right.

2. We are NOT going to change the colors:

As many of you mentioned, the proposed colors are rather dull and not as lively as the old ones.
As we we are mostly a digital brand, RGB is our master color space.

Thanks for the effort!